DANGER to the Summorum Pontificum. Our news translated in english 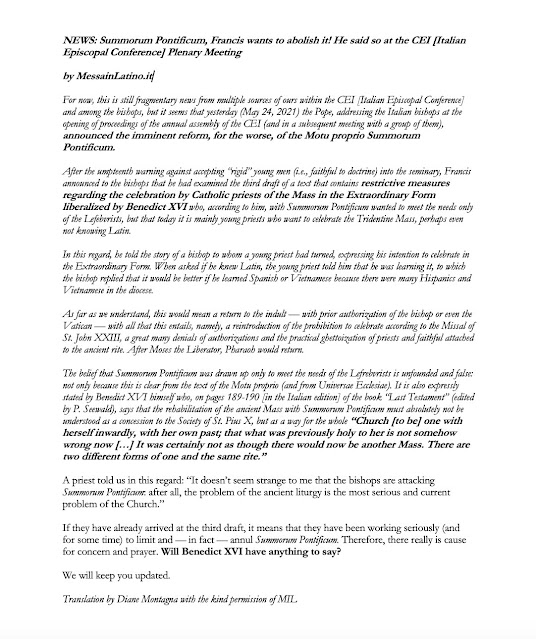 Our news of the imminent serious and current danger to the Summorum Pontificum was immediately reported in the Anglophone environment of Tradition.
Here the English translation of our whole post (also taken up by Rorate Caeli), thanks to our kind friend, the vatican journalist Diane Montagna.
la Redazione

NEWS: Summorum Pontificum, Francis wants to abolish it! He said so at the CEI [Italian Episcopal Conference] PlenaryMeeting. [25.05.2021]

For now, this is still fragmentary news from multiple sources of ours within the CEI [Italian Episcopal Conference] and among the bishops, but it seems that yesterday (May 24, 2021) the Pope, addressing the Italian bishops at the opening of proceedings of the annual assembly of the CEI (and in a subsequent meeting with a group of

them), announced the imminent reform, for the worse, of the Motu proprio Summorum Pontificum.

After the umpteenth warning against accepting “rigid” young men (i.e., faithful to doctrine) into the seminary, Francis announced to the bishops that he had examined the third draft of a text that contains restrictive measures regarding the celebration by Catholic priests of the Mass in the Extraordinary Form liberalized by Benedict XVI who, according to him, with Summorum Pontificum wanted to meet the needs only of the Lefebvrists, but that today it is mainly young priests who want to celebrate the Tridentine Mass, perhaps even not knowing Latin.

In this regard, he told the story of a bishop to whom a young priest had turned, expressing his intention to celebrate in the Extraordinary Form. When asked if he knew Latin, the young priest told him that he was learning it, to which the bishop replied that it would be better if he learned Spanish or Vietnamese because there were many Hispanics and Vietnamese in the diocese.

As far as we understand, this would mean a return to the indult — with prior authorization of the bishop or even the Vatican —with all that this entails, namely, a reintroduction of the prohibition to celebrate according to the Missal of St. John XXIII, a great many denials of authorizations and the practical ghettoization of priests and faithful attached to the ancient rite. After Moses the Liberator, Pharaoh would return.

The belief that Summorum Pontificum was drawn up only to meet the needs of the Lefrebvrists is unfounded and false: not only because this is clear from the text of the Motu proprio (and from Universae Ecclesiae). It is also expressly stated by Benedict XVI himself who, on pages 189-190 [in the Italian edition] of the book “Last Testament” (edited by P. Seewald), says that the rehabilitation of the ancient Mass with Summorum Pontificum must absolutely not be understood as a concession to the Society of St. Pius X, but as a way for the whole “Church [to be] one with herself inwardly, with her own past; that what was previously holy to her is not somehow wrong now […] It was certainly not as though there would now be another Mass. There are two different forms of one and the same rite.”

A priest told us in this regard: “It doesn’t seem strange to me that the bishops are attacking Summorum Pontificum: after all, the problem of the ancient liturgy is the most serious and current problem of the Church.”

If they have already arrived at the third draft, it means that they have been working seriously (and for some time) to limit and —in fact — annul Summorum Pontificum. Therefore, there really is cause for concern and prayer. Will Benedict XVI have anything to say?

We will keep you updated. 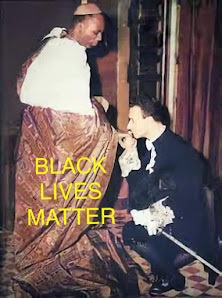